Self-replicating ability. Normally, when cells reach the end of their lifespan, they die and disappear. Stem cells, on the other hand, constantly replicate themselves, leaving behind copies of themselves, some of which are transformed into various other cells. By dividing into cells with the exact same abilities and leaving copies behind, stem cells do not disappear, but continue to exist.

There are three main types of stem cells that are currently being studied.

Somatic Stem Cells (SSCs) are the stem cells that exist in the living body among other normal cells. There are various types of SSCs, including ASCs, bone marrow-derived stem cells (BSCs), neural stem cells, hematopoietic stem cells (HSCs), hair follicle stem cells, and mammary stem cells. Of these, ASCs and BSCs have similar properties and are referred to as mesenchymal stem cells (MSCs).

Embryonic Stem Cells, also known as ES cells, are stem cells created by extracting cells from an embryo (blastocyst) at the early stage of development, which is slightly advanced from a fertilized egg, and culturing them using a special method. They have the excellent properties that allow them to become any kind of tissue (pluripotency), but since they are made from fertilized eggs, there is a debate on bioethics.

Induced Pluripotent Stem Cells, also called iPS cells, are stem cells created through genetic engineering by introducing several genes into body cells. They have the excellent properties that allow them to become any kind of tissue (pluripotency). However, there is a relatively high risk of the cells becoming cancerous and the cost of creating the cells is enormous .

Compared to ES cells and iPS cells, SSCs cannot become any kind of tissue, and their pluripotency is somewhat lower. However, the major advantages of SSCs are that they involve fewer ethical issues, have less risk of becoming cancerous, and incur relatively lower cost of treatment.

ASCs are a type of SSCs that possess the aforementioned self-replicating ability and pluripotency. Although they cannot become all types of cells, they have been shown to differentiate into a wide variety of cells, including bones, cartilage, nerves, muscles, cardiac muscles, blood vessels, hepatocyte, and islet cells, as well as fat. In addition, they have two major characteristics that are attracting a great deal of attention as useful cells for regenerative medicine.

Functions such as immunomodulation and suppression of inflammation

Mesenchymal stem cells, such as ASCs and BSCs, are known to have the ability to modulate and normalize abnormal immunity and to control runaway inflammation. This property is expected to be applied to the treatment of various diseases that are thought to be caused by abnormalities in immunity and inflammation.

Compared to other cells, adipose tissue can be harvested in larger quantities using techniques such as liposuction, thus creating less stress on the body. BSCs, which have similar properties, are located in the bone marrow, the part of the bone that cannot be easily harvested. Located on the surface of the body, adipose tissue can be considered a treasure trove rich in stem cells.

The high potential of ASCs has attracted the attention of researchers from around the world who have studied the cells’ application in a variety of treatments.

Some examples are as follows:” 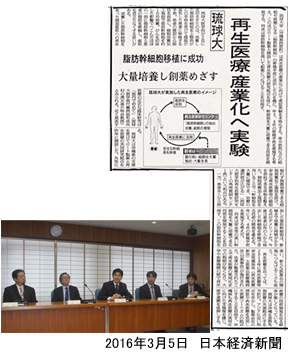 According to the Nihon Keizai Shimbun article published on March 5, 2016, the Faculty of Medicine at the University of the Ryukyus successfully performed the first treatment of “”transplantation of cultured adipose-derived stem cells for facial depressed lesions”” in Japan in March, 2016. Since then, the university has been accumulating similar treatment results.

Moreover, the groundbreaking transplantation of stem cells grown by in‐vitro culture has attracted a lot of attention both in Japan and abroad.

The Faculty of Medicine at the University of the Ryukyus and Grancell have built on the various technologies, skills, and implementation systems accumulated during the facilitation of this treatment. We have prepared for the research and treatment with a thorough review of ethical issues. We have also established a system to safely harvest adipose tissue, extract stem cells in a top-notch cell processing facility (CPC), and cultivate them in a highly efficient and completely sterile environment. The accumulated technology to verify and maintain the quality of the cells has enabled us to process fine-quality cells that are safe for transplantation in the patient’s body while providing excellent therapeutic effects.

Our achievement in building a solid track record in the field of treatment, which requires the highest standard of safety and efficacy, has been made possible through the support of the various technologies.”